What do Medical Physicists Do?

Medical physicists are concerned with three areas of activity: Clinical Service and Consultation, Research and Development, and Teaching. On the average their time is distributed equally among these three areas. 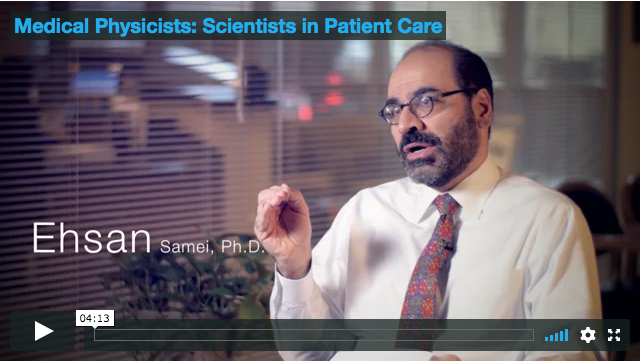 Many medical physicists are heavily involved with responsibilities in areas of diagnosis and treatment, often with specific patients. These activities take the form of consultations with physician colleagues. In radiation oncology departments, one important example is the planning of radiation treatments for cancer patients, using either external radiation beams or internal radioactive sources. An indispensable service is the accurate measurement of the radiation output from radiation sources employed in cancer therapy. In the specialty of nuclear medicine, physicists collaborate with physicians in procedures utilizing radionuclides for delineating internal organs and determining important physiological variables, such as metabolic rates and blood flow. Other important services are rendered through investigation of equipment perfor­mance, organization of quality control in imaging systems, design of radiation installations, and control of radiation hazards. The medical physicist is called upon to contribute clinical and scientific advice and resources to solve the numerous and diverse physical problems that arise continually in many specialized medical areas.

Medical physicists play a vital and often leading role on the medical research team. Their activities cover wide frontiers, including such key areas as cancer, heart disease, and mental illness. In cancer, they work primarily on issues involving radiation, such as the basic mechanisms of biological change after irradiation, the application of new high-energy machines to patient treatment, and the development of new techniques for precise measurement of radiation. Significant computer developments continue in the area of dose calculation for patient treatment and video display of this treatment information. Particle irradiation is an area of active research with promising biological advantages over traditional photon treatment. In heart disease, physicists work on the measurement of blood flow and oxygenation. In mental illness, they work on the recording, correlation, and interpretation of bioelectric potentials.

Medical physicists are also concerned with research of general medical significance, including the applications of digital computers in medicine and applications of information theory to diagnostic problems; processing, storing, and retrieving medical images; measuring the amount of radioactivity in the human body and foodstuffs; and studying the anatomical and temporal distribution of radioactive substances in the body.

Medical physicists are also involved in the development of new instrumentation and technology for use in diagnostic radiology. These include the use of magnetic and electro-optical storage devices for the manipulation of x-ray images, quantitative analysis of both static and dynamic images using digital computer techniques, radiation methods for the analysis of tissue characteristics and composition, and the exciting new areas of computerized tomography and magnetic resonance imaging for displaying detailed cross-sectional images of the anatomy. Medical physicists are also engaged in research and development on imaging procedures utilizing infrared and ultrasound sources.

Typical examples of the various research areas presently under active investigation may be found in scientific journals dedicated to this field. The journal, Medical Physics, is published by the AAPM. In addition, the AAPM holds two national scientific meetings a year, one in the summer and one in the winter. During the winter meeting, the AAPM conducts scientific sessions in joint sponsorship with the Radiological Society of North America. Special summer courses, workshops, and frequent regional meetings are also held by the AAPM.

Often medical physicists have faculty appointments at universities and colleges, where they help train future medical physicists, resident physicians, medical students, and technologists who operate the various types of equipment used to perform diagnosis and treatment. They also conduct courses in medical physics and aspects of biophysics and radiobiology for a variety of gradu­ate and undergraduate students. The Commission on Accreditation of Medical Physics Education Programs, Inc. (CAMPEP), jointly sponsored by the American College of Radiology (ACR), American Association of Physicists in Medicine (AAPM) and the American College of Medical Physics (ACMP), assures high educational standards in the field. A list of accredited programs is available here.

What are the Credentials of a Medical Physicist?

How does someone become a Medical Physicist?

Several U.S. universities offer academic programs in medical physics leading to a master's or doctor's degree. A thorough preparation in general physics is highly desirable before entry into these programs. The most common programs emphasize the physical properties and medical applications of radiation of all types. Important skills that should be acquired during academic training include knowledge of electronics and computer techniques. A list of training programs is available here.

Academic training alone does not make a medical physicist. Practical experience with medical problems is essential. This experience may be acquired through a residency traineeship or postodoctoral program of one or two years in a hospital. These programs are becoming an increasingly important mode of entry into the profession. A list of institutions offering such residency programs is also available here.